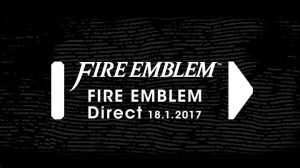 Earlier this afternoon Nintendo treated us all to even more information about upcoming releases, this time centered around the Fire Emblem series.

The first news came in the form of an announcement for Fire Emblem Echoes: Shadows of Valentia, which is a  3DS remake of the second game in the series, Fire Emblem Gaiden. Echoes is set to launch May 19, 2017 and amiibo of the games two main characters will launch the same day as a 2-pack. Second, Nintendo announced that a mainline Fire Emblem will be returning to home consoles for the first time since Radiant Dawn on the Wii, the Nintendo Switch title is in the works and planned for a 2018 release and no other information was shown. After that, the teaser for Fire Emblem Warriors from the Switch conference was shown with some additional footage. The game was confirmed for a Fall 2017 release and will also be launching on the New 3DS at the same time. The game was also confirmed to be in the hands of the same team behind Hyrule Warriors. Finally, a mobile game by the name of Fire Emblem Heroes was announced that will focus on strategic gameplay and includes characters from all across the series. Heroes will be available on Google Play store February 2, with no date slated for iOS but will be available in the future for Apple products.

So, four  Fire Emblem games were in the spotlight today. Android users will be able to play Heroes next month, followed by Echoes’ release in May, Warriors will hit during Fall, and finally next year we’ll be treated to a full mainline game on the Switch. There is a lot of excitement in the Fire Emblem community, and rightfully so. Nintendo showed off some great material and have created even more excitement for the Switch console.